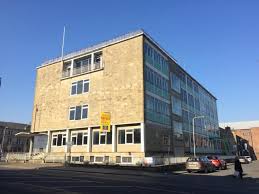 building in the centre of Keighley to West Yorkshire Police, who subject to planning permission, will build a new Police Station.

The 1960s former college building that faced onto Cavendish Street has now been demolished by Bradford Council contractor D.Hughes Demolition and Excavation Limited.

The re-use of the site as a Police Station is in keeping with the original grant agreement that made it possible for the Council to buy the surplus and outdated college buildings in 2006.

The purchase allowed the construction of the new Keighley College building close to Keighley Railway Station. Keighley College has recently been recognised as one of the most improved colleges in the country.

The old building was extensively marketed, unfortunately there weren’t any offers that the council was able to accept and the decision was taken to demolish the redundant building and re-use the plot of land.

Councillor Alex Ross-Shaw, Bradford Council’s Executive Member for Regeneration, Planning and Transport, said: “It’s good to be able to follow the demolition with an announcement of what will happen next. I know people in Keighley have long wanted a return of a Police Station in the town centre and I am pleased we’re able to deliver that.”

West Yorkshire’s Police and Crime Commissioner (PCC) Mark Burns-Williamson, said: “This is another really positive step in the right direction in getting a new police station in the heart of Keighley.

“I have always said that the preferred option would be to ensure a permanent presence in the centre of Keighley that is fit for purpose, provides value for money and delivers more visible policing for our communities. And with the demolition work, this is now becoming closer to a reality following complex legal and contractual hurdles that have been cleared within our estates teams.

“I want to thank our partners including Bradford Council and Keighley MP John Grogan for all their support and work behind the scenes to help ensure that we arrive at the right outcome for our communities and those who live and work in the town.”

Keighley MP, John Grogan, said: “When I was elected as Member of Parliament for Keighley I said my number one priority was to get the police station back into the centre of the town where it should be. The new building will be a reassurance to local people and a sign that the fight against crime is being pursued vigorously.

“This is the best Yorkshire Day present that Keighley could wish for.”

Chief Superintendent Osman Khan, Bradford District Commander, said: “Since the decision was made to sell Airedale House we have been in favour of relocating our local officers and staff to a purpose-built town centre location in Keighley and are delighted that agreement has been reached to purchase a prospective site.

“We believe that this is the best option for all concerned and that it underlines our commitment to serving the people of Keighley and its neighbouring areas.”