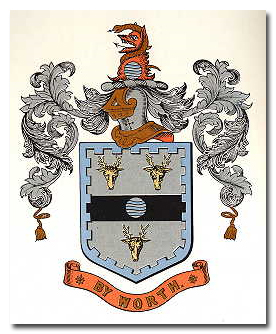 The Herald’s College granted the Borough Arms of Keighley on 7 February 1883 after the incorporation of the borough by Royal Charter on 28 July 1882.
The dragon’s head was the creation of the ancient Knightly family of Kighley which held the manor for sixteen generations. Edward I in the 33rd year of his reign (1305) granted them a Market Charter.
The last male representative, Henry Kighly died in 1567, leaving two daughters as co-heirs. (Anne, the elder, married (by licence dated 21 March 1580-1) William Cavendish, son of Sir Wm Cavendish of Hardwick, afterwards created Baron Cavendish of Hardwick in 1605 and Earl of Devonshire in 1618; their descendant, the present Duke of Devonshire, is lord of the manor of Keighley. To show the connection between the two families and to emphasise the friendly relations between them, a serpent, which is the Cavendish crest, is twined around the head of the dragon and the heads of both animals are turned in the same direction.

The circle, which encloses the wavy lines of blue (known in heraldry as “a fountain”) at the bottom of the crest, is the emblem of water and refers to the situation of Keighley in a well watered valley, the streams of which flow through the town and used to supply the early factories with water power before the steam engine came into general use.

Like the crest, the shield is a combination of the arms of the Keighley and Cavendish families: the black fesse and the silver background belong to the former and the three stags heads to the latter. The fountain reappears in the fesse and the embattled border indicates the antiquity of the town.

The motto may be interpreted in three ways. While recognising the geographical situation of the town on the banks of the Worth and acknowledging the value of its waters to the town’s industry, it presents a moral challenge to the citizens that they should justify themselves “By Worth.” 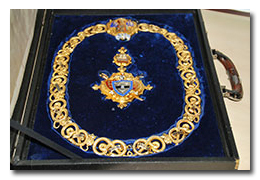 The Mayoral Chain was presented by Mr and Mrs Henry John Hope on the incorporation of the Town and in memory of Mrs Hope’s father, Mr William Burr, the first Clerk to the Local Board. The chain itself is arranged by successive links of the nowed serpent of the Cavendish family which is the crest of the Duke of Devonshire. [Click on the picture to see a larger version]

The large and massive serpent links boldly rendered in repousse are progressing towards the centre and have a suggestive resemblance to the intervening links of the famous chain of the Bath. The leading feature of the chain is the elaborate link which is a memorial of the old Local Board of Health under whose sway the town progressed for so many years and with which the late Mr William Burr was closely identified.

The whole length of the chain, including centre link, is 45 inches. Immediately below the centre link is a small badge or pendant relating to the first mayor, Mr Benjamin Septimus Brigg, the centre being occupied by his crest, a brig in full sail, with the motto, “Auspice Deo” both being richly enamelled. The border of this smaller cinque-foil has the Mayor’s name with the words “First Mayor” in early English capitals. From this depends the actual badge, rich in design, workmanship and enamel. The form is quatrefoil with finals of the fleur-de-lis, tastefully carved in solid gold.

The centre holds a shield emblazoned in proper colours with the borough arms, and surmounted by a crest, a dragon’s head with a snake coiled round it not in antagonism but unitedly defying all comers, this representing the union by marriage of the Keighley and Cavendish families.
The chain and badge were designed and manufactured by Messrs T & J Bragg, Goldsmiths of Birmingham and London. The chain is duly assayed and hall-marked in gold of 18 carat quality 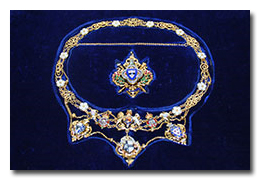 The Mayoress’s Chain was presented by the late Mr H I Butterfield and was made from a special design carried out with the idea of introducing local emblems. The badge is treated in a light and graceful style, having the arms of the town in enamel within a quatrefoil border which is set with diamonds. This quatrefoil will suggest the larger badge which is worn by the Mayor while the mace and fasces which appear in saltire behind also continue the resemblance.

At the sides of the quatrefoil are leaves of laurel set with emeralds while in the upper part of the badge is shown the crest of the town. Diamonds and rubies appear at intervals around the frame work of the decoration and an enamelled ribbon at the bottom gives the date “1902.”
Coming to the chain itself the centre link is formed by a representation of the full Royal Arms, supporters and motto, given in correct heraldic colours, while on either side of this is an enamelled English rose surmounted by the Imperial Crown, one having on the front the initial “E” set in diamonds, with “VII” in blue enamel and the other one has the Queen’s initial “A” set in diamonds.

On the front of the chain are a series of festoons and these connect three important badges. The first one is placed between the badge and the centre link of the chain, and forms a connecting link. It is a fine wrought and carved link, having in the centre the arms, crest, helmet, mantling and motto of Mr Butterfield, the donor.

The other two badges are suspended from the opal set cabochon, and are made up of rich scroll work, the centre of one having the arms of Mr H C Longsdon, the Mayor at the time of presentation, while the other one has the arms of Mr B S Brigg, the then Deputy Mayor and the first Mayor of the borough. These arms are all given in proper colours in enamel.
The chain bears the following inscription:- “Presented by H I Butterfield of Cliffe Castle Esquire, to the Corporation of Keighley on the Coronation of Edward VII, 9 August 1902 to be worn by the Mayoress and her successors Annie Longsdon, Mayoress, George Burr, Town Clerk, Vivat Rex.”

In 1900 the late Mr John Brigg, MP, presented to the Corporation a gold oval badge for wear by the Mayor at the smaller functions which do not call for the display of the full Mayoral Regalia.
The inscription on the gift explains the object of the givers: “Presented by John Brigg of Kildwick Hall, JP, MP, to the Corporation of the Borough of Keighley to commemorate the grant of a separate Commission of the Peace to the Borough, May 2nd 1899, Charles Hy Foulds, Mayor. George Burr, Town Clerk.”
The badge has the Corporation shield carved in silver and enamelled in colours set ;in by a chase quatre-foil border and surrounded by a boldly modelled wreath of oak leaves with acorns jewelled with agates with the borough motto “By Worth” underneath. Above as the crest is a dragon’s head intertwined with a serpent and charged with a fountain in enamel.
A dark blue ribbon passes through the serpent’s folds as the suspender.

A royal blue ribbon is attached and the brooch-pendant is contained in a case of similar colour.
The brooch-pendant is made so as to enable it to be work either as a brooch or a pendant and it is engraved on the reverse side with the name and period of office of the recipient, the case being suitably embossed with the Borough Arms and the initial letters of the recipient’s name.

The Mace, which was presented in 1893 by the late Mr John Brigg, is made of massive silver-gilt. It consists of a cylindrical staff surmounted by a cup-shaped head and furnished with a ring or “knop” round the middle and a boss at the end. The total length is 4ft 6in. The cup is surmounted by an Imperial crown of bold design, consisting of a circlet of crosses and fleur-de-lis, out of which spring four arches decorated with bead work and surmounted with a ball and a cross.

Inside the circlet of the crown and on the dome of the cup is a raised shield bearing the coat of arms of the donor and surrounded by the following inscription:-
“To keep in memory of the public services his father, the late John Brigg of Guardhouse, Esq, JP and in acknowledgement of the honour done to himself in being appointed Returning Officer at the first election of the Council i n1882 and of that done to his family by the election of his brother, Alderman Benjamin Septimus Brigg, JP, as first Mayor of the Borough, this Mace has been given by County Alderman John Brigg, of Kildwick Hall and Guard House, JP, the Corporation of Keighley during the third year of office as Mayor of Alderman Ira Ickringill. Geo Burr, Town Clerk AD MDCCCXCIII.”

One face of the cup is carved in relief the Royal Arms and on the other the arms of the Borough; between them are placed, in repousse work, two groups of emblems – one consisting of the golden fleece, distaff, hand-spindle, machine-spindle, shuttle and hand-comb, to represent the worsted trade; and the other consisting of furnace bellows, crucible, stamper, moulder’s scraper, pincers, hammer, anvil, swage and file, to represent iron-working – the two principal industries of the town. Below these are two tablets, both engraved with a “brig” in full sail – the badge of the donor.

Round the upper part of the face runs a scroll work of foliage, and at the base are sprays of oak, plane-tree and ash, the indigenous trees of the district. The cup is supported on the stem by four brackets of vine branches. The stem is chased with a luxuriant wreath of wild roses and the knop and boss are embossed with acunthus leaves and buds decoratively treated.

There are two Loving Cups … the first Loving Cup was presented by the Eighth Duke of Devonshire and was presented by the Eighth Duke of Devonshire and bears the following inscription:- “The gift of the most Noble Spencer Compton, Eighth Duke of Devonshire, KG, Baron Cavendish of Keighley and Lord of the Manor, commemoration of his enrolment as an Honorary Freeman of the Borough on the 20th of August 1904, William Clough, Mayor, George Burr, Town Clerk.”
The cup was made by Messrs D & J Wellby Limited of London and is of massive silver gilt weighing ninety one ounces and is a facsimile of the well known Loving Cup in the possession of the Worshipful the City of London Goldsmiths Livery made by Paul Lamerie who died in 1751.

The second Loving Cup was presented by Mr and Mrs Sam Clough This cup is classic in style and copied from an antique. It has a massive though graceful body with three handles, the spaces between handles containing the Arms of the Borough and the following inscriptions:- “King George V and Queen Mary crowned June 22nd 1911.” “Presented to the Borough of Keighley by Mr and Mrs Sam Clough, Mayor and Mayoress, 1910-11 and 1911-12.”
The body is carried by a richly ornate stem supported by a substantial foot. The cup weighs 100,400 ounces troy, is mounted on a fumed oak plinth and was made by Messrs Fattorini & Sons Limited, Art Gold and Silversmiths, Bradford.