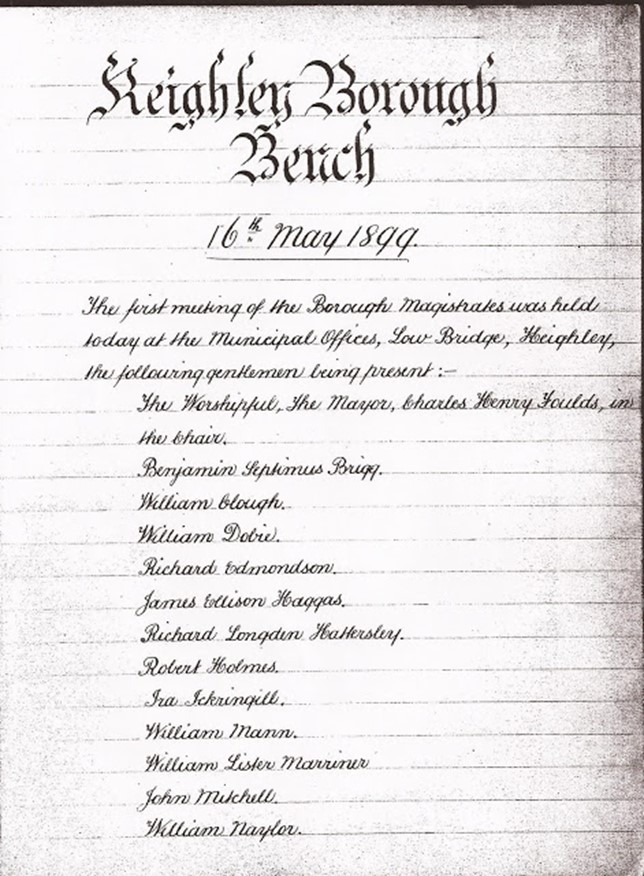 History of the Civic Centre

The Civic centre comprises of three distinct, physically joined, buildings which are in many ways quite independent of each other.

In 1831 the large building at the junction of North Street and Devonshire Street was built to house a lock up and Court to deal with the increasing number of summary offences being committed throughout the area as a result of the Vagrancy Act 1824, sections of which still apply today. Prior to 1831 the Towns Court Barons would meet once a month in the Devonshire Arms but it was not until 1899 when the first meeting of the Borough Magistrates was recorded as you can see this predates the Town Hall which was built c1902.

Originally the act dealt with rough sleepers and beggars usually former soldiers who had been discharged after the Napoleonic wars in 1815 and had little or no chance of employment. However, the act contained many other offences such as prostitution, fortune telling and encouraging children to beg amongst others.

Due to the abject poverty prevalent at the time the total lack of state aid and the inability of the lower and working classes to obtain secure employment there was no lack of persons who would have passed through the doors of this building which incidentally was in Devonshire street.

In 1856 Parliament passed the County and Borough Police Act making it compulsory for all of England and Wales to have a Police force, as a consequence the West Riding Constabulary was born and the Building became a Police Station. it soon became apparent that there was need for a local Superintendent as the Police Division of Keighley stretched from the Bradford City Boundary in the South to Lancashire in the North and West with Leeds and Harrogate on its Eastern boundary a vast area.

It was decided to build a house on the land that stood next to the Magistrates building for the Superintendent and his family land that was partly owned by the Duke of Devonshire’s estates and this was achieved in 1888 when the Duke agreed to the building but placed a covenant on the land which exists to this day, Keighley Town Council pays £2000 per annum to the estates of the Duke.

This house now makes up most of the Council offices and the Police Museum entrance and old café areas.

However, from 1888 to 1964 it was the home of the local Police Superintendent and the remaining land was given over to, in the first-place stables latterly garaging before being built on in 1964. The original cells remained in use right up to c 1964 when the third building was built the one which now houses the cells and more offices upstairs.

However, in 1964 this new building became the new cells, Police garage and Office space, upstairs the number two Magistrates court was constructed. The Police Superintendent was moved out and the down stairs of his house was taken over by the Police and the front office and public counter was created the door that had served as the main entrance in Devonshire street was closed up and a new entrance in North Street the one that is used today was created.

In 1831 what is the main hall in the Civic centre was the court and the bar area was the court offices. Latterly when justice became a little more even-handed a Magistrates room, waiting rooms for solicitors, witnesses and those appearing on summons was provided, prisoners were brought up into the courts via a stair from the cells that exited into the courts in the North West corner, the room still survives and is a store room but the bars are there on the windows for all to see. These stairs were in use until the Magistrates moved out in c 1999 and the Police took over the entire building the Police built the cell area as you see it today in 2000 moving out to new premises in 2005 but the cells remained in use until 2007 when the building was closed. Keighley Town Council bought the building in 2010 fully refurbishing it and bringing it back into use rather than allowing it to decay.

Whilst much has been improved and altered over time the buildings remain very much the same on the outside and even some of the original 1831 cells are still there but you need to know where they are as they have been put to other uses.

I have no information on whether there were any deaths either natural or otherwise occurring in them or as to the nature of those incarcerated but I would believe that the perpetrator of the 1864 Murder at Guardhouse would have certainly been in one. I also believe that John Sagar who was alleged to have murdered his wife Barbara in 1857 would have also spent time there before going on remand to Leeds assizes where he was acquitted on lack of evidence.

I do know however that the cells constructed in 1964 housed at least 12 killers all since 1976 and it may be more! There are reports of hauntings in the cell area reports of cell doors closing and locking whilst unattended all of which I find hard to believe and despite being in there on hundreds of occasions during my time as a Police Officer and latterly as a Councillor have never witnessed anything but never say never!!