A Keighley Man for us all to be proud of. 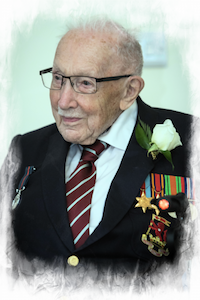 the NHS in the run-up to his 100th birthday during the COVID-19 pandemic.

Thomas Moore was born in Keighley, West Riding of Yorkshire, on 30 April 1920 and grew up in the town. His father, Wilfred, was one of a family of builders, his mother was a head teacher. Moore was educated at Keighley Grammar School and started an apprenticeship in civil engineering.

Sir Thomas Moore, popularly known as “Captain Tom”, is a former British Army officer and centenarian, known for his achievements raising money for charity in the run-up to his 100th birthday during the COVID-19 pandemic.

Moore served in India, the Burma campaign during the Second World War, and later became an instructor in armoured warfare. After the war, he worked as managing director of a concrete company and was an avid motorcycle racer.

On 6 April 2020, at the age of 99, he began to walk laps of his garden in aid of NHS Charities Together, with the goal of raising £1,000 by his hundredth birthday. In the 24-day course of his fundraising he made many media appearances and became a popular household name in the United Kingdom, generating much interest in his life story, earning several accolades, and attracting over 1.5 million individual donations. He featured in a cover version of the song “You’ll Never Walk Alone” sung by Michael Ball, with proceeds going to the same charity. The single topped the UK music charts and made him the oldest person to achieve a UK number one.

On the morning of his hundredth birthday the total raised by his walk passed £30 million, and by the time the campaign closed at the end of that day had increased to over £32.79 million (worth almost £39 million with expected tax rebates). His birthday was marked in several ways, including flypasts by the Royal Air Force and the British Army. He received over 150,000 cards; he was appointed as honorary colonel of the Army Foundation College. On 17 July 2020, he was invested as a Knight Bachelor at Windsor Castle.

Moore was conscripted in the 8th Battalion, Duke of Wellington’s Regiment (8 DWR) in May 1940, stationed in Cornwall, shortly after the beginning of the Second World War. He was selected for officer training later that year, he attended an Officer Cadet Training Unit before being commissioned as a second lieutenant on 28 June 1941.

He was promoted to war-substantive lieutenant on 1 October 1942 and to temporary captain on 11 October 1944.

As part of the Fourteenth Army, the so-called “Forgotten Army”, he served in Arakan in western Burma (now Myanmar) – where he survived Dengue fever. Tom returned to the UK in February 1945, to take a training course on the inner workings of the Churchill tanks, learning to become an instructor. He did not return to the regiment, remaining as an instructor and the Technical Adjutant of the Armoured Vehicle Fighting School in Bovington Camp, Dorset, until he was demobilised in early 1946.

After leaving the army, he worked as a sales manager for a roofing materials company in Yorkshire, and later as managing director of a Fens-based company manufacturing concrete, Cawood Concrete Products Ltd, which was renamed March Concrete Products Ltd. after he led a management buyout in 1983. The company was sold to ARC in 1987.

For 64 years, he organised the DWR’s annual reunion. 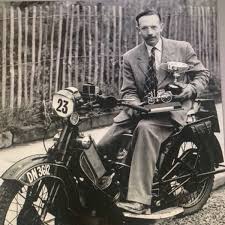 Moore raced motorcycles competitively – he purchased his first when he was 12 – wearing the number 23. He rode a Scott motorcycle, winning several trophies. Moore was a member of the Keighley and District Photographic Association between 1934 and 1936, as had his father.

He was a contestant in the Christmas Day 1983 edition of the BBC Television game show Blankety Blank.

On 6 April 2020, during the COVID-19 pandemic, and with his 100th birthday approaching, Moore began a fundraising campaign for NHS Charities Together, a group of charities supporting staff, volunteers, and patients in the British National Health Service (NHS). He aimed to complete one hundred 25-metre (27-yard) laps of his garden, ten laps per day, with the help of a walking frame, branding the endeavour

The initial £1,000 goal having been realised on 10 April, the target was increased, first to £5,000, and eventually to £500,000 as more people around the world became involved. Contributions rose exponentially after British media publicised the endeavour, beginning when Moore made a brief appearance by telephone, on Michael Ball’s Sunday programme on BBC Radio 2 on 12 April. Moore, who joined Twitter in the same month, used the site to express joy at the public’s generosity in donating such a large amount of money.

He achieved his target of one hundred laps on the morning of 16 April, watched at a safe distance by a guard of honour from the 1st Battalion of the Yorkshire Regiment, the regiment into which the DWR were merged in 2006. He said, he would not stop, and aimed to do a second hundred.

On the morning of his birthday, he had raised £30 million The JustGiving page for his campaign closed at the end of that day; the final amount raised subsequently being stated there as £32,796,475 (plus another £6,173,663.31 expected in tax rebates under the Gift Aid scheme) – a record for a JustGiving campaign, beating the previous record of £5.2 million raised (partially posthumously) by Stephen Sutton. More than 1.5 million individuals donated.

Funds raised by Moore are being spent on such things as well-being packs for National Health Service staff facilitating rest and recuperation rooms, devices to enable hospital patients to keep in contact with family members, and community groups who support patients once discharged from hospitals. Once his campaign ended, Moore encouraged people to continue to donate, directly to the NHS Charities Together’s urgent appeal, and subsequently via his own

When we started off with this exercise, we did not anticipate we would get anything near that sort of money. It is amazing. All of them, from top to bottom, in the National Health Service, they deserve everything that we can possibly put in their place. They are all so brave. Because every morning or every night they are putting themselves into harm’s way, and I think you have got to give them full marks for that effort. We are a little bit like having a war now. But the doctors and the nurses, they are all on the front line, and all of us behind, we have got to supply them and keep them going with everything that they need, so that they can do their jobs even better than they are doing now.